You must be familiar with cutting hair if you are even thinking about hair thinning scissors since most people don’t even know that they exist. Using them is another form of art, and just cutting and styling hair usually requires their use if you want to make a perfect result. The best thing about these shears is that they can affect the hardest hair that won’t act like you would want it to – simply by thinning it you can make it more mold-able.

Hair thinning scissors are the type of cutting shears where the blades are formed like a saw – they have a sort of teeth in them. That way when you use it to normally cut hair, it is only going to cut through some of the hair, and leave others untouched. Even if you would go all the way down to the beginning of the hair you would be able to remove just a small fraction of them and not leave a dent. It only makes the growth look thinner and that way you can make it easier for the person to style their hair because there is less of a mass that needs to be controlled.

When you compare them to shaping shears, they have one big difference. Since the shaping shears only have one blade that is specially shaped and the other one is a regular one. That way they remove a little more than the thinning shears, but at the same time, they do still provide a smoother result as regular shears. You can easily use them to make the borders of shorter and longer hair smoother, and at the same time, you can shape the form of the entire look.

When you are using your hair thinning shears, be sure that you know what you are doing. Don’t just start clipping away at places, but instead, you will have to have a clear vision about the things that you think you will accomplish with it. Many men who already have thing hair on the top of their hair won’t appreciate it if you go out and thin it even more, so only use them if the thickness of the hair is producing a problem. For example, it could be that the hair is so thick that it is not mold-able with any hair product. In these cases, I would have to recommend heavy use of your hair thinning scissors without hesitation. 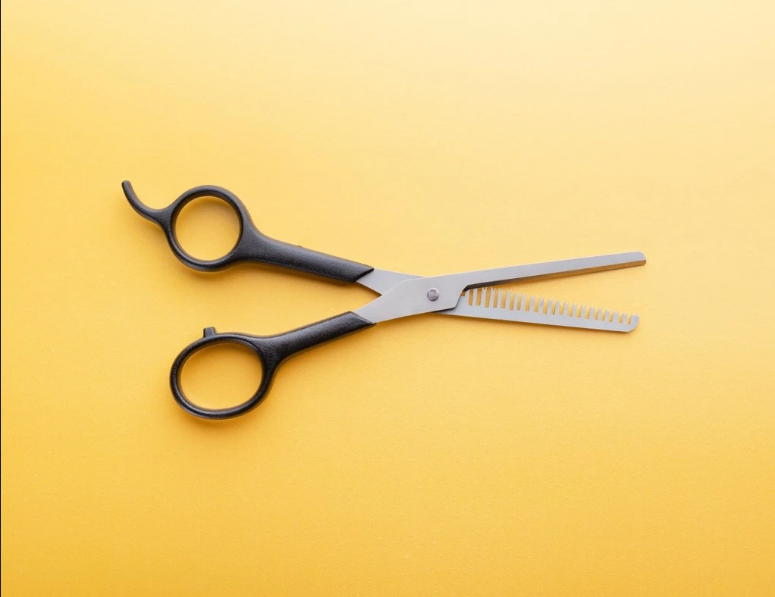 Use of Hair Thinning Scissors

Many people want to know how to use thinning scissors, Actually thinning scissors are used by people who wish to thin out their curly hair. They can help to prevent choppiness and blend your hair while layering. Before using thinning shears, you need to be aware of certain aspects of these scissors. You cannot use these scissors if you already have fine and thin hair.

Do not use these scissors near the roots of your hair. Cut through the middle of your hair and make sure not to cut too much hair at once. It is always recommended not to use these shears more than 3 times a year. It is quite important to look for the best thinning scissors with high quality. Do not compromise yourself on buying cheap hair shears sold in the market.

When you wish to remove only a portion of your hair, then buy thinning scissors with double rows of teeth. If the shears are designed with fewer teeth, they will remove less hair at once. It is worth investing your money in getting thinning scissors. Be wise in choosing quality thinning shears and change the style of your hair the way you want.

Features of Smartwatch That You Can Get

Features of Smartwatch That You Can Get

What is a Butt Lifter How It Gives Your Butt a Boost?